ABOUT LOST AND GROUNDED BREWERS BEERS

Lost and Grounded Brewers is a brewery in Bristol, UK, established in July 2016. We are particularly fascinated by the precision of German brewing and the idiosyncratic nature of Belgian beers, and we chose the brewhouse of our dreams that could help us make these wonders of fermentation.

In 2014, a man named Rich Poole walked into Small Bar, Bristol, and handed some beer over to Bruce Gray and Jack Granger. This began a brewing journey that started on a 200L kit through the back of that same bar, before developing into a cuckoo brewery operation known as Left Handed Giant.

Our own physical brewery operation began in 2017, before raising more than £1m from the local community via Crowdcube to build the beating heart of our business, a brewpub overlooking the floating harbour in the centre of Bristol, which opened in 2019. We now operate over 2 brewery sites, selling over 70% of our 4000HL per year production through our own venues at the Finzels Reach Brewpub, our St Philips Tap Room and still, from where it all began at Small Bar.

We are community owned, and aim to execute an employee buy-out within the next 3 years, making us one of the only UK employee-owned breweries. Independence and the freedom to express our creativity is central to our business, and we believe that giving our team ownership and leadership of our company is crucial to ensuring this remains the case throughout our breweries’ long lifetime.

Moor Beer was reborn in 2007 when Californian Justin Hawke purchased the defunct business and created what has become one of the world’s top rated breweries. Named from the Levels and Moors area of Somerset where the brewery originated, Moor Beer moved to central Bristol behind Temple Meads Rail Station in 2014 where it now showcases a Tap Room, shop and tours.

Their inspiration comes from living around the world and working with different beer styles and techniques. They take the German, naturally hazy philosophy, combine it with the American flavour-forward approach to brewing and the British secondary refermentation tradition to create what they call Modern Real Ale.

Beer is about flavour, drinkability and enjoyment. Stemming from their California roots, Moor’s beers are full flavoured, frequently hop-forward, but always balanced and drinkable. This comes from their use of British floor malted barley from one of the last remaining floor maltings in the UK, Tucker’s Malthings of Devon, their use of select hops from around the world and a laser focus on quality at their in-house laboratory. 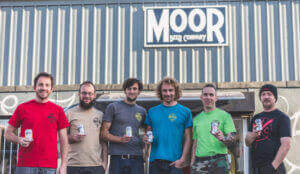 Moor Beer Co champion what they call Modern Real Ale, brewing flavour-forward, often highly hopped, beers using traditional British secondary fermentation. They refuse to use finings (a by-product of the Sturgeon fish) in their beers, meaning that all their beers are vegan friendly, and naturally hazy.

It’s earned them stacks of international awards, a wide collection of top ratings and they’re the first to be accredited by CAMRA for cask, keg, bottle and can.

All in all great reasons to drink Moor beer!