Mondo Brewery came about when Todd Matteson and Thomas Palmer met in the trenches of the burgeoning East London Beer Scene in the Summer of 2013. Both seasoned homebrewers with professional skill sets picked up from their brewing experiences in Germany, Japan, Spain, the US and the UK, they began to hash out the fine print for Mondo Brewing Company on the late shift in a brewhouse in Hackney. Their stated goal: make the best beer they can consistently, using the best equipment, the best practices, and the best ingredients.

In late 2014 they met a brewmaster and businessman from Ukraine named Vasyl Mikulin and renowned brewing equipment manufacturer Lazslo Toth. They joined forces and to develop a new brewery in London. In December 2014 they took over an empty warehouse and office space in Battersea and the real adventure of navigating the U.K.’s licensing procedure, dealing with contractors, upgrading everything from the water lines, gas and electricity supply to the complete renovation of the ground floor office into what is now the Tap House began. April 2015 saw the first brew go into the tanks and Mondo Brewing Company was now substance and no longer floating around in the ether. 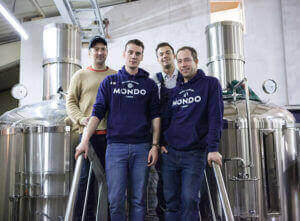