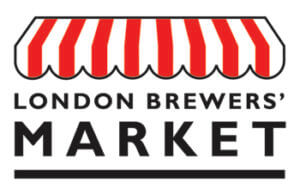 My initial thought’s turning up at this event “wow, this will get busy.” But don’t let that put you off this fantastic beer festival, it’s busy in a good way.

Each of the brewery stalls are small and compact so you get a huge amount of variety in a small space. Like the proverbial tardis once you are in it feels a bit bigger, and upon landing in the centre I immediately set sail for the Five Points stall to say hello – it would be rude not to seeing as they were hosting. The only slight disappointment on greeting them and looking at the taps on offer was that there was pretty much everything but the Brickfield Brown. I’ve fallen in love with this nutty hazelnut-chocolate affair and wanted to start with this beer – alas not. Once I’d recovered from my initial mini-sulk I tried the excellent XPA pale ale. A lovely light and fresh beer, perfect to start things off. Thumbs up indeed. 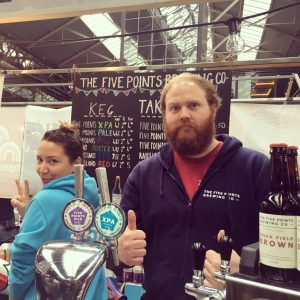 Snuggled nearby were the guys from Anspach and Hobday. I have to hold my hands up on this one, they are a brewery I have been meaning to take on board for some time now and still haven’t (sorry chaps!) However, things inched a little closer to changing that after trying their IPA fresh from the tap and leaving with some bottles of the Belgian Bitter and Miami Weiss to try. 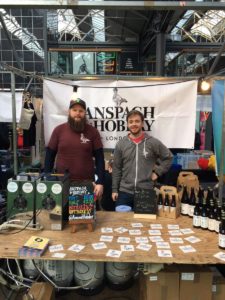 It’s worth noting at this juncture that the beer festival is not a world unto itself within Spitalfields Market on festival day. It sits like some kind of throbbing epicentre at the middle of the affair. Surrounding it in a very comforting and brotherly blanket is the vinyl market and beyond this the market envelops the festival in a third layer of t-shirts, art and the usual wares. It’s almost like you have to fight your way through a Narnia-like wardrobe of market to get to the beer, which I particularly liked. 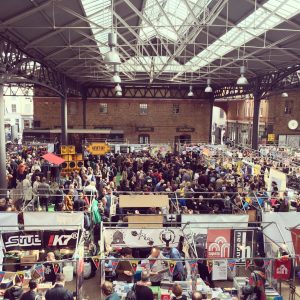 By now the festival was getting busier and I decided to pay a trip to the corner stall manned by the owner of Brick Brewery, Ian. Their showcase beers included their bigger can of Peckham Pils and a Rhubarb Sour on tap. I tried the sour and I had to conclude it was bloody epic. A perfect balance of sweet and sour kept this perfectly in line with the fresh rhubarb flavour. It’s no coincidence everyone I saw after told me to “head over to Brick and try the sour”. One for the future and I do hope they bottle it for the site. 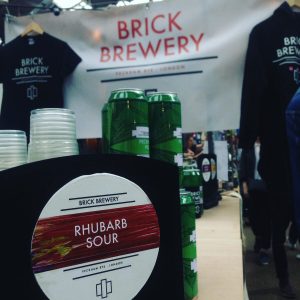 Directly opposite Brick Brewery lay Hackney Brewery and their pop up for the day. I’ve not been the greatest fan of their beer in the past and if I’m honest their offerings have passed me by somewhat before now.  However on the recommendation of a couple of people including the lovely Rebecca Pate (great to put a name to a tweet) I made the short trip across the now thronging stream of human beer-swillers to their site. On arrival I decided on their barrel-aged stout and their new juicy pale and session IPA. All were excellent. Surprisingly so. So are we to welcome a new wave of Hackney brewing, something a little more “craft”? Speaking to Dan from the brewery we concluded in unison, as I tasted the newest in a line of beers ready for a rebrand, that they had “gone up a gear, so yes basically. Exciting times for this outfit and one to watch over the next two or three months – one to watch indeed. 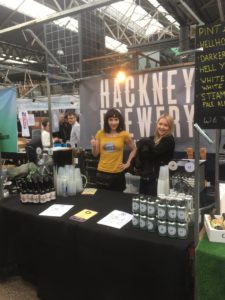 Fourpure brewery were next on my hit-list after I’d paid a trip over to Mondo via Orbit and tried the latest batch of Juicebox. It was tricky to tell just how juicy this batch was after the hazy murk on offer at Hackney (really) but again a solid offering from the Bermondsey team. They, like Brick, were also showcasing their bigger new core range, their Indy Lager in cans.

Directly opposite on the far side Beavertown brewery had set up shop and annoyed the “wandering set” with their popular line snaking back through the day clogging up the festival with their popularity. This brewery smash it (as we know) and had core beers Neck Oil and Gamma Ray on tap. Tempus Project bottles sat there on the side like a big menacing pile of small bombs waiting to explode in stick-grenade style. Another lap and another half an hour or two saw the beer change when the Neck was replaced by Lupuloid and taps continued their constant relentless bobbing as pints flowed constantly. 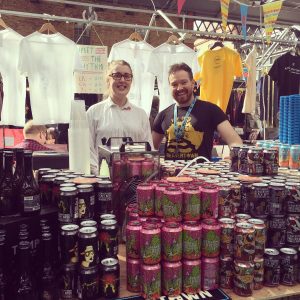 A tough act to follow, or certainly one not to be next to, the brilliant new team from Brewheadz brewery had their work cut out just along from Beavertown. That didn’t seem to bother them, nor could it, as they were flat out. And so they should be, their new range is excellent and the Red Rye Fired Up Donkey IPA was on top form; an easy sell to my friends who didn’t know what to try. A short kick around to where we started and the new Elusive Brewery were churning out their fresh batch beer and greeting everyone with a smile. New to the scene and new to the festival they were loving it and looking very clearly already at home.

There were honourable mentions for a load more breweries and the odd beer or two but there’s only so much one man can drink and plenty more to write about but I’m saving that for the next edition of the pop up which is in Greenwich on the 5th of May. There is another Spittalfields market edition of this fantastic market is in July so please do get to one if you can – it won’t disappoint in terms of range, vibe and cracking London beer. 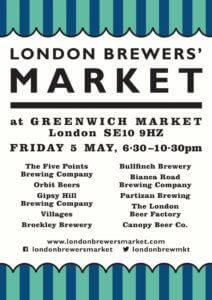 By sharing this we promise to high-five a sad looking stranger in the street. Please share and help make London happier. Buttons below, thanks