We love new breweries and we love small passionate brewers so what better way to celebrate this than a sit down and chat with the team behind south London’s latest set-up? Here is our Q&A with Shane, Alex and Phil AKA: Streatham Brewing Co. 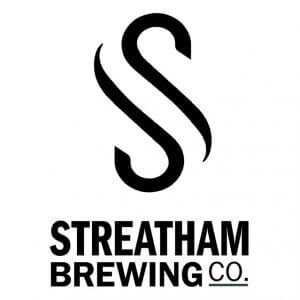 We’re based in the old stables in the back garden of The Railway Pub in Streatham Common and keep things ‘bijou’ on our shiny 200 litre Braumeister kit. We got our licence in 2016 and have been perfecting recipes until recently, when we launched with a session IPA Samuel’s Tipple and a Black IPA called Cynthia’s Remedy. Both beers are named after local luminaries: Samuel Johnson and Cynthia Payne. That’s probably the only time in history when they’ve been mentioned in the same sentence.

We are: Shane, who owns The Railway. Alex, who has been running the quiz at The Railway for about 6 years, and Phil, an opera singer and obsessive brewer who takes part in (and regularly comes second in) the quiz. One summer’s evening over a pint of something tasty they decided to start a microbrewery.

Our first two beers are both sessionable, because we want people to head straight back up to the bar (or the fridge) and get themselves another. There are two schools of thought with Black IPAs – the prevalent one is that if your eyes are closed you shouldn’t know that it’s a dark beer. We prefer a Black IPA which has a little more heft to it – so we’ve gone with some darker grain character offering a bit of earthy pepperiness and chocolate, rather than offering up a trick beer. That’s currently paired with Cascade (which we find balances those darker malts beautifully) and slightly controversially, Sorachi Ace (which tips the balance forward with some spicy lemon character). Our Session IPA is just the sort of hop-forward beer we enjoy and uses Simcoe which Phil says is probably his favourite hop – with its complex aroma encompassing both pininess and some tropical fruit.

5) Favourite beer (That’s not your own!)

Phil loves his sour beers (the big beer-nerd), and his favourite beers these days tend to come from that world. He tried Wild Beer Co’s “Beyond Modus III” recently and he wouldn’t shut up about it. When pressed for something a little more mainstream he started waxing on about Poperings Hommel Bier… Phil doesn’t seem to know what mainstream means.

6) What are your plans for the beer in the future?

We’d love to get a couple more core beers nailed down. We’ve been tinkering with a Belgian blonde recipe. We love the esoteric, so we have some interesting ideas for special one-offs. One plan for the future is to use a 20-litre set-up to experiment, and treat The Railway as a test-bed for the creations which reach our high standards. If the feedback is good, then we could promote that beer to the core collection. We like the idea of a local pub having its latest brew available to sample and the ability for the customers to shape the output.

7) …and plans for the brewery?

Things are likely to get to a point where we’ll outgrow our current home and have to move out. It’ll be sad because we like being linked to a pub, but it’ll be exciting because it’ll mean we’re doing something right. When that happens we’d probably keep our current equipment as a pilot kit, and scale things up. We’d like to start a tap house too – obviously Shane has the know-how when it comes to launching and managing pubs, so we’d be all set for that when the time is right. If Alex has his way it’ll involve blues bands, a barbecue kitchen, and of course the obligatory quiz night. 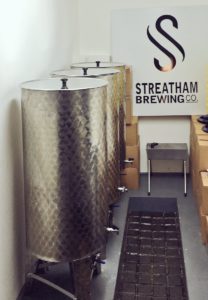 8) Why is Streatham special?

Streatham is special because it’s our home. It used to get a lot of bad press but these days it’s a great place to live – with a huge common, interesting new restaurants and cafes, as well as great pubs. There’s a lot of local pride in the independent nature of so many of the new businesses which have cropped up.

9) What is your take on the hop-bombs and DIPAs that are in fashion at the moment?

Hop-bombs – love them! We love the mouth-numbing sensation of the big DIPAs, such as Brixton brewery’s Megawatt. Cloudwater obviously do these remarkably well – their V.11 was sheer sherbetty joy. Hop-bombs have moved away from the IBU “arms-race” of a few years ago and have dived into the wonderfully exciting flavours which new hop combos used in late additions and dry-hopping can achieve.

It’s all about the company isn’t it? Doesn’t matter where you are. Having said that, we thoroughly enjoy both types of drinking, and often will attempt long sessions at both venues in the same day. Alex ‘pre-drinks’ harder than most people party.

12) What are your thoughts on the craft beer boom?

We’re loving it. Out with the ordinary and boring… in with the independent and interesting. That goes for most things in life… !

13) Where do you think the craft beer scene is heading in the future?

Observers keep telling us that the craft beer boom is a bubble which will burst, but I think that whilst we have the really big craft producers such as Brewdog pushing things further into the public consciousness, that shifts the status-quo. It’s not seen as such a fringe thing anymore. Obviously there are always going to be people who are only interested in the macrolagers which still dominate the industry, but more and more people are aware of, and are interested in, craft beer. Large-scale breweries and their parent companies continue to buy-up successful craft producers and attempt to develop their own craft lines because they see that such beers are beginning to encroach into their market-share. These brewing behemoths may not necessarily have the charm or integrity of the true microbreweries, but the more 330ml bottles of hoppy pale ale there are in the shops the less intimidating the whole scene appears. There have long been issues of image surrounding both the Cask Beer and Craft Beer movements, which have often seemed deliberately manufactured to alienate the uninitiated. Craft seems to have more successfully moved away from this into being something people aren’t turned off from. There’s still work to be done – there’s a lot of scope to convert people who think that they “don’t like beer” in an exciting new world of craft beer which encompasses beers that taste more like coffee, or cider, or white wine, or sherbet! We think that craft beer is here for the long-haul. 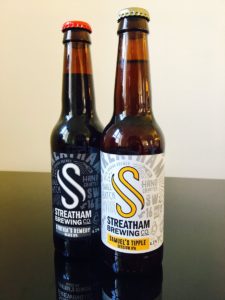 14) If Streatham Brewing Co. was a car what would it be?

A white 1967 Triumph Herald. Small and understated but classy and fun to drive.