When a beer’s called Gooey & Nutty and has a big old Snickers bar on the front, can you really turn it down?!

Or what about when a beer is labelled a Candy IPA?

Peppered amongst the innovative this week there’s also the tropical fruit cocktails and lip-smacking sours we all know and love, so let’s dive in!

No surprises a new DEYA DIPA tops the list this week! DEYA hit the world with their two new DIPAs, As I Walked Out One Spring Morning DIPA and Swam The Straights Of Johor DIPA.

For me, Swam The Straights just about edges it I reckon… calling on Southern Hemisphere hops Nelson, Motueka & Vic Secret for a juicy, clean and delicious Double IPA.

None of us can ever get enough Verdant, who just seem to add to their outstanding range with new brilliance every time.

They’ve used the hop currently named HBC 630 here, which has been described as supplementing tropical fruit concoctions with cherry candy notes. (If that sounds too out there, Citra Meditations DIPA celebrates a much more established hop.)

Have you introduced yourself to 360° Brewing just yet?

From their base down in Sussex they’ve brewed up two identical NEIPAs with just one difference – the yeast.

Reasonably priced, grab em both to see the difference yeast can make. (And I know it’s technically the hops section, but fair play to 360 for championing Best Bitter too!).

Welcome back Vault City, who have made my April with Blueberry Lemon Drizzle Sour!

6. Pomona Island – Sure ‘Nuff ‘N Yes I Do Rhubarb Sour

And is it just me, or have Pomona Island reached a point where their sours outpunch their hops?! Don’t get me wrong, the latest Ibuki Sorachi Ace and Yuzu DIPA is better than it’s ever been. But if you’ve only got time for one beer and you have Sure ‘Nuff ‘N Yes I Do Rhubarb Sour available, can you really turn the rhubarb sour down?!

Danish powerhouse To Øl has realised the fun to be had in sours it seems, as their new Mammamamma Double Strawberry Cheesecake Berliner Weisse testifies. As well as the strawberry cheesecake face-full, the colour of this is just glorious. Really well priced for the quality too.

9. To Øl this week arrived Lauters of Magnitude

Along with a truckload of To Øl this week arrived Lauters of Magnitude, brewed with real maple syrup and cold brewed coffee.

Heaps of oats make for a thick mousse-like foam with a velvet soft mouthfeel, milk sugar dials up the creaminess and maple syrup adds subtle sweet maple to balance the layers of cold-brewed coffee. Mega!

If you’re picking up To Øl’s sour and dark, rest assured there are hoppy numbers awaiting too. A good tip is Clearly Opaque West Coast IPA, which showcases what this brewery can do with a much-loved style. There’s even a Pils. Collect the whole set?!

There’s a load of new stuff from Germany’s Frau Gruber just online too, including a DDH IPA, the collab with Dry & Bitter Trading Places DIPA and even a well hopped Helles.

Big shout out to new Bristol-based brewery Newtown Park, who are definitely worth checking out. Expect fruity IPAs and pales in Always In Motion Is The Future (love the can art) and Five Point Six IPA. Oat & rye infused Shape The Future Pale Ale is nonconformist.

I continue to champion our South London neighbours Brick, whose brews always smash people’s expectations. Hibiscus Tea & Lychee Sour shows off Brick’s experimental side. West Coast IPA: Chinook & Columbus shows what they can do when armed with hops. Sabro Pale proves they know how to tropical.

There’s bound to be stuff I’ve missed this week but that’s the beauty of it – dive on in and see what you can find!

As does their Fruited IPA.

Or how about their CBD-infused Green Heathen CBD NEIPA??

Hope you have fun working through a few new beers this long weekend.

Hope you get to try some of these wicked beers this week. As always, stay safe out there. 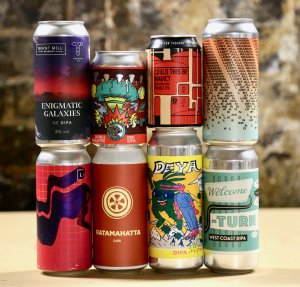 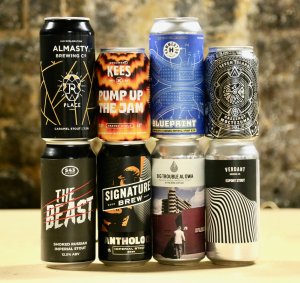 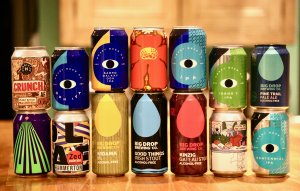