40FT doesn’t look like a normal brewery, and I don’t mean the brewery itself. True, that in itself is odd even by London craft beer standards but “40ft”? It’s just two letters and numbers. They don’t even have a website. OK, that’s an exaggeration they do have a website but it’s made up of two images and a few numbers. So I’m hoping you’re getting the vibe here? Minimalist. It’s a little off-the-wall. It’s just how they are. However as much as 40ft come across on the face of it as an oddity and an aloof set up it’s not entirely true, I genuinely don’t think they try to be this way, it happens naturally in a slightly naive and alluringly disarming way. From the given evidence you’d be forgiven for wanting to avoid these guys as an annoying and achingly-hip bunch of East London upstarts with nothing but a bit of BS behind them. If you did then you’d be sadly wrong it’s not intentional. Beyond the facade of the makeshift website and quirky workspace this is a fun group of passionate brewers with a serious, yet incredibly fun, micro-brewery. 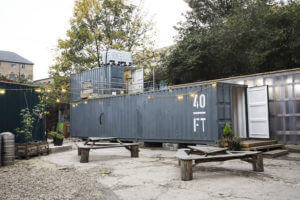 40ft operate out of 40 foot’s worth of shipping container space – hence the name – and Benedikt “Ben” Ott is the head brewer. From Cologne, home of Kölsch beer, their flagship beer is a lager, or as he calls it Larger because it is bigger in flavour and unfiltered. Most people think it’s a typo. Again most people are mistaken when it come to these guys.  The brew (which is actually pronounced the German way, ladger), is lighter, made of Lemon Drop hop to leave a lasting and very pleasant citrus finish. The other beer is a wonderfully modern and fresh pale ale (called Pale – correct spelling this time) and is curated in their Dalston home right next to the Overground station. The beer has an intense yet subtle taste; it’s made of rye and imperial malt and a variety of mixed hops. 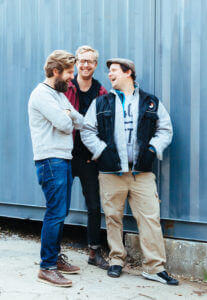 So two beers, a group of friends and a brewery. It’s seems like an easy ride on the face of it but talk to the team and it was far from it for the boys behind the beer. It all came from a discussion between like-minded men with a hazy business plan and a days brewing course behind them they squirrelled a loan and together and executed one of East London’s most remarkable start-up breweries to date. Sure they’re not taking over the world like Beavertown but there’s a sense of community, organic growth and honesty at 40ft that doesn’t manifest itself in anything other than a genuine love for beer. It helps they are one of the happiest looking bunch of brewers you’ll meet and I’m sure there have bee dark days when those grins were tested in the extreme but the clan form the container continue to brew on and do it brilliantly. 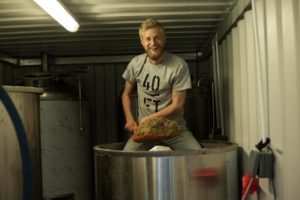 So why the container? Space is tight in London and alway has been so 40ft always knew they needed to be creative with storage. The beer is brewed and fermented in one container and transferred to tanks in the one below to mature all within one courtyard. With such a bold design, central set-up and cracking beer it’s no wonder the team have made quite a name for themselves in the couple of years since they set up. The natural progression was to a functional and effortlessly trendy tap room – another box ticked in the evolution of this cracking outfit. It’s a special space that is certainly worth seeking out of a weekend even if it’s just to see how many people you can fit into a shipping container – trust me it’s that busy and that good. 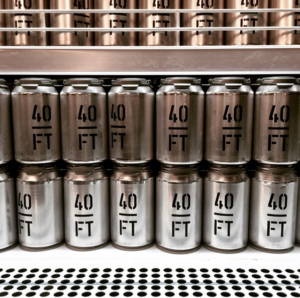 40ft Pale and Larger is available online at Craft Metropolis