But then that would be doing a disservice to the Craft Bitter, the Rose & Hibiscus Berliner Weisse and BBNo’s Tropical Fruit Smoothie Beer that I’m recommending this week.

So let’s just say this week was another week of wicked craft beer releases all round, and kick things off with one of those hop-monsters I mentioned. Ready?!

Northern Monk, frankly, have had a hell of a 12 months that in my opinion has sealed their rep as one of the country’s best brewers there is.

Their OFS series has showcased how versatile they can go with just an outstanding exploration of different countries and styles. This week for example, their OFS032 Sabro Wit shines the spotlight on Belgian Wheat Beer, while OFS033 Belgian Lager is as fine a craft lager as there is.

But what really knocked me sideways this week was the massive return of Double Heathen Twist Edition Imperial IPA. It’s their flagship mega IPA… on steroids!

Double Heathen is packed with oats and wheat for a velvet smooth mouthfeel… then a huge 30g/l dry hop leaves the beer dripping in ripe tropical fruits with loads of citrus zest and a welcome peppery finish. Double Heathen really is wicked stuff.

While we’re on the subject of massive hop-bombs, Left Handed Giant’s Psychedelic Views TIPA is a BEAST!

Bright orange and stone fruit are balanced with a bitter dank bite for a lovely, boozy but balanced Triple IPA.

In a week of a new Verdant DIPA and Minotaur Shock’s return, my final hoppy hat tip really has to go to BBNo’s 55 Breakfast Double IPA. And that really goes to show just how epic BBNo’s new creation is.

Brew By Numbers set out to create a fruity breakfast smoothie of a beer here, first bowling in with huge helpings of oats, wheat even corn for maximum smoothie goodness. Then they go in with a one-two punch of citra and strata hops. Thick and creamy with an intense tropical fruit aroma and sweet strawberry, passion fruit and tangerine loveliness, Breakfast is as close to a breakfast smoothie a beer could be!

Barrel-aged specialists Low Key don’t brew much, but what they do come out with is pure gold every time. Unsurprisingly the new Disco Demolition Derby Imperial Stout is no exception, with lashings of coffee and chocolate as you’d expect.

There’s also some dark cherry notes moseying around in this. Then Low Key top things off with a dollop of tonka, which really is the icing on the beer.

Why did it take us all so long to realise how good a bitter can be?!

You’ve got crunchy biscuit, you’ve got sweet marmalade, you’ve got ripe blackberries and honey and floral pine aromas. It’s difficult to resist. There really is a reason bitter is in!

My final dark recommendation this week has to go to the new Hammerton special Pecilla Vanilla & Pecan Stout, which for my money is the pinnacle of three new outstanding Hammerton syrupy dark gems.

Silky and smooth, you get a massive hit of vanilla with Pecilla, which is balanced by bitter chocolate and a subtle pecan sprinkle. This of course is from the brewery that brought us Crunch. So you know this is gonna be bloody good!

It’s tart AF, naturally, thanks to the dried hibiscus. But there’s also a nice, balancing sweetness coming through here, probably from the rose water?!

Polly’s obviously get that quality ingredients make for a quality beer… so they’ve loaded this up with hand-selected, locally sourced rose water and blossoming hibiscus for something extra special.

New this week, Brew York’s Albus Crumbledore Mixed Fruit Crumble Sour is as epic as it is limited.

The brewery’s most insane pastry crumble sour yet, it’s only packed with 11(!) different fruits and 9 varieties of malts. The result is a huge fruity and zesty assault on the senses… with biscuity a bite.

Finally, you’ll be as pleased as I was to see North’s Volta Orange & Rhubarb Sour has returned!

Volta is the beer that well and truly launched North’s sour credentials. It’s back, and it’s as brilliant as ever.

Even more zesty this time around, this is brewed up with juicy blood orange and lovely sweet rhubarb that’s apparently grown just around the corner from North’s plant up in Leeds.

There’s never enough time to wax lyrical about all the epic stuff that lands each week, but I’ll do my best by starting with the return of Gipsy Hill’s famous Double Vision Hepcat. Hepcat’s popularity is unwavering, and this is the double version of the beer we can’t get enough of.

To add to their special sour, Polly’s sent us over a DIPA, an IPA and a Pale to tuck into. All classic Polly’s which means all bleeding brilliant.

Actually, pale lovers have a smorgasbord of good stuff to pick and choose from this week, with The Missing Link from Siren, an East Coast Pale from S43, and Phantom’s Luck Pale Ale. Anyone would think spring has come!

Phantom didn’t stop with the hops, unleashing the excellent Spring Strawberry & Lemon Zest Sour and – dark fans take note – Half Moon Glow Stout. Half Moon Glow is a Dime bar in a can!

Jumping back to hops, there’s new releases from DEYA, a DDH IPA from Hammerton and Brew York/Drop Project collab The Consultant NEIPA to get stuck into.

Finally, and is it too late for a barley wine?!

Hope you get to crack open one or two of these wicked new beers this week. Cheers as ever & happy drinking! 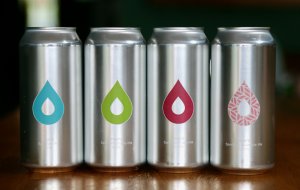