Paul (Anspach) & Jack (Hobday), two London graduates, founded Anspach & Hobday in the pursuit of a better beer experience. Guided by the wave of contemporary craft beer and inspired by the illustrious brewing heritage of London, Anspach & Hobday’s vision is to brew and curate the best of beer and put London back at the centre of the map for beer in Europe. 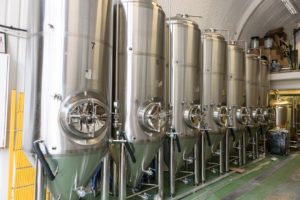 The Brewery and Tap is based in an Archway in Bermondsey, London. Just a stones throw from the Shard and Tower Bridge. And right in the heart of the Victorian brewing quarter. 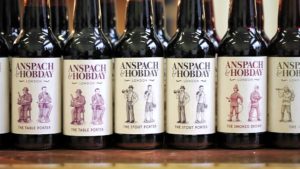 Leading the new wave of craft beer in London, Anspach & Hobday curates a mix of modern and classic flavours. Pouring quality into everything we do, our beers are anything but the usual.

They have since expaned and have added a small bar in Camberwell called The Pigeon to their portfolion of drinking establishments. Serving ten lines of draught beer, wine, gin, negronis, snacks and darts. Featuring some of our favourite brewing friends from time to time including: Cantillon, Lost and Grounded, L’Ermitage Brasserie and many more!

“I love Anspach & Hobday. I first tasted them at Three Wine Men an event we were doing with Oz Clarke and Tim Atkin, their beer is just delicious. I mean, who wouldn’t want to drink it?”