Beer snacks have come a great way since the old days of a floppy bag of overpriced crisps and the infamous peanuts with revealing backgrounds – but then so has beer. It is becoming increasingly common to start seeing the craft beer world take it’s foody friends seriously when it comes to it’s snacking place alongside drinking. Not a week goes by without new research or articles being written about the importance of beer tasting and food pairings. It’s thought by some to be a better and more refined drink than the old stalwart wine and is now not looked down upon where it possibly was in years gone by. When you think about the brilliant word of craft beer and the innovations that are occurring within it it seems only common sense that this revolution and partnership is a natural one. From malt to hop to palate beer is taking it’s place alongside food as a sophisticated and complex palate cleanser and accompaniment – all hail a wonderful marriage! 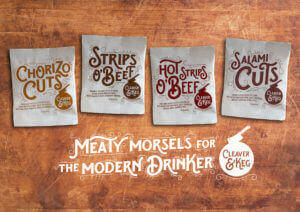 The new Cleaver and Keg range

We couldn’t let these developments pass us by a Craft Metropolis Central and we have taken in Cleaver and Keg and their “meaty morsels for the modern drinker” as part of our range. Meat and beer is a wonderful combination, whether it is a dark smoky stout with chewy robust beef or tangy saisons and fruity pales with sweet salami these snacks have been made with one thought foremost in the creators mind – beer. Of course you can eat them on their own but where is the fun in that when something has been specifically made with an IPA, for example in mind? Dan Searle the owner of Cleaver and Keg tells us this:

“Meat needs beer and beer needs meat’ dan agreed with his old school mate Sean,a London charcuterist, as obsessed by the craft of curing meat as danny was by the craft of brewing beer. Which was when they took matters into their own hands.

Cleaver & Keg; good meat, the best in fact, 100% British too, ready to be paired with pints that deserve them. Salt cured, air-dried, richly-spiced meaty morsels, doing more to set off your pint and tastebuds than a crisp, scratching or peanut ever could.”

We couldn’t have put it better ourselves and that’s why you can find all four styles – chorizo, salami, beef and spicy beef at our checkout page. Enjoy!