Beer of the month: The Experiment Requires That You Continue by Pressure Drop Brewing and Verdant

Great beer. Even better breweries. This is my favourite beer in the last month to land on the site not because of how drinkable it is or how fantastically packed with flavour it is but more about where it’s come from and the two breweries that combined to make it.

On the one hand we have Verdant. The Kernow outfit that have been making massive (Cornish surfer style) waves with their incredible hop soups and modern beer.

On the other we have Pressure Drop. An expanding north London set up who have come into their own in the last two year and are now firmly chasing down some of the best in the capital.

For my personal tastes these two releasing this beer and coming together is almost the perfect partnership – and that’s why it’s my beer of the month. 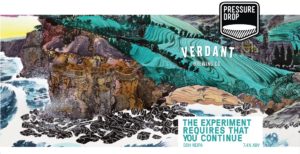 Falmouth is hardly the brewing capital of the UK, it’s hardly anything to think of it in terms of beer so when new brewery Verdant started to get rave reviews on social media outside of their home county the people of the UK pricked up their beery ears and started to seek out these new hop-forward beers. Hens teeth does not come close. Selling out in seconds and always in demand this brewery have dominated craft beer drinkers “must-try” up and down the UK and remains so years on. Their widespread appeal and demand is more quaint the more you look at their background. Falmouth is more maritime than monster IPAs but that’s exactly what Verdant started to do and have not deviated from since. From nowhere in 2014 to one of the most sought after beers in tap rooms and beer delivery boxes up and down the land the breweries main players Adam and James have created exactly what they set out to do. “we had decided that hoppy beers were what we wanted to be drinking. Think juicy, hoppy, unfiltered hazy beers and always vegan!” 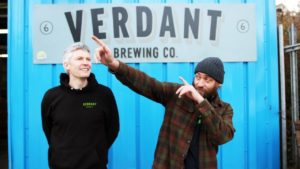 Since then the beers have flowed thick and fast – sometimes way too fast for them to keep up with demand – but when you see Verdant on the label you always know you’re going to get high-hop, high flavour, high craftsmanship in that can or bottle of beer. So when the chance to take them onto the site came along I jumped at it when they announced their partnership with Pressure Drop.

Pressure Drop have not enjoyed quite the meteoric rise that the west country boys have managed but that’s not to say their output is any less impressive. Their beginnings are just as humble as the aforementioned Falmouth warehouse. 2013 saw a shed and a few friends give birth to an idea that is now very impressive Pressure Drop brewery. Armed with a very solid and very suppable core range (Pale Fire, Bosko and Street Porter etc) the unit are now one of the main players in north London after expanding into new premises in Tottenham. 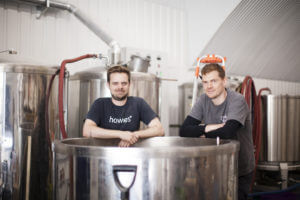 Their beers, core and otherwise, are always very well rounded and smooth and have a somewhat playful edge to them. From the slightly 70s wallpaper style artwork to the zesty and punch tasting notes of Wallbanger Wit and Cast Iron Billy you know you’re onto a good thing with a Pressure Drop beer. What most excited me however about this beer collab was that Pressure Drop have recently been nailing the hop-forward beer like there’s no tomorrow. Stepping up a level from the go-to Bosko IPA is Domino Topple. You can go up a gear again to Alligator Tugboat and them mellow off again with the recent Parachute DDH. The main thing here is this brewery know exactly what to do with hops and when it comes to making a moody, cloudy hop-swamp of a beer then you’d be happy to let them take charge. Add into the mix the earlier protagonists and their affiliation with modern hop flavours and you have a marriage made in heaven. Two hop-forward, knowledgeable breweries coming together to brew something they both clearly have a passion for and are exemplary at doing. The result is a wonderful blend of two great minds and one great beer. A hazy New England style IPA – I think deserves to be dropped in every Craft Metropolis box this month. 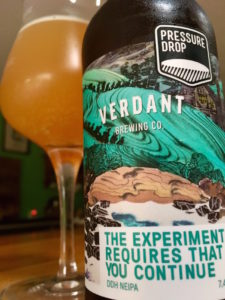