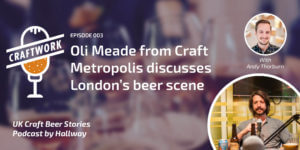 The craft beer scene in London is always tossing up beery fun, and here at Craft Metropolis we’re always keen to get involved wherever possible. It’s the nature of the craft beer industry, along with passion, which we happen to have in bucket loads.

That’s why when Andy Thorburn, host of the recently launched Craftwork podcast, got in touch with us we couldn’t resist the temptation to be one of the launch guests of this exciting new series. In our episode founder, Oli Meade, and Andy talk at length about the story behind Craft Metropolis, about what inspired Oli to start a craft beer subscription service with a focus on London, as well as all the lessons learned along the way. In this bare-all interview we hope to have given all our awesome beer lovers the chance to learn a bit more about us, and where we came from. Because ultimately, we believe that transparency and personalisation are vital in making sure that you have a great experience. That’s why we hand pick every beer that goes into your boxes, why we also let you pick your own if you want to, and always listen to feedback. 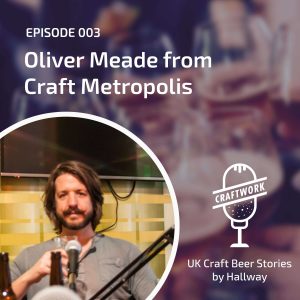 Craftwork is produced by Hallway, the UK’s only digital agency dedicated to growing the craft beer industry, and is a fortnightly series of deep-dive interviews with some of the incredible people behind the UK’s craft beer scene. Craft Metropolis were also fortunate enough to be involved with the Craftwork launch party, which took place at the iconic Rake in Borough Market with a tap takeover, where we curated some of the beers alongside the other launch guests, Brewheadz, Pete Brown, Sambrook’s and Utobeer. At the launch party Andy commented, “The idea for Craftwork came while I was researching and working with the craft beer industry. I was having so many interesting conversations with the people behind all sorts of beer businesses and it occurred to me just how many valuable insights and gems of information there are that would motivate and help others in the industry.”

You can listen to our episode now on iTunes, Soundcloud, Stitcher, Acast and on Hallway’s website at www.hallway.agency. Listeners can also request the episodes to be sent by email.