Toast – the charity beer made with bread are crowdfunding

When we were first asked to #raiseatoast way back last year we didn’t really know what to make of it all. When the creators of Toast ale came to us to tell us all about their beer we were naturally interested to hear more. Our intrigue was expanded beyond the fact there was a new beer in London town by the fact they had brewed their new ale with bread! Now, you may have read about this unique beer or even seen it on the television in the last 12 months and it got airtime for the exact same reason we were interested; it was unique, tasted great and was above all for charity. What’s not to like? Quite, so we were the first craft beer club to support the beer made with bread. If you don’t know about Toast ale then in their own words here is their story of making beer from bread Toast Ale-the story 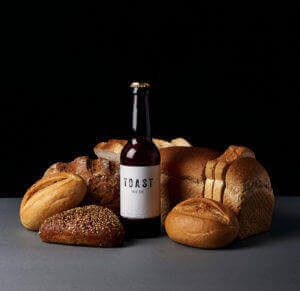 In a nutshell nearly HALF the bread made goes to waste, and the UK is one of the worst culprits, so these clever scamps started using some of those wasted crumbs to make beer. They started in London and have since moved out to Yorkshire (two of the worlds best places IMHO) and continue to follow their dream of ending this type of food waste.

So after a stint with Jamie Oliver at the end of his pier and fresh out of the Saturday Kitchen TV studios what next for the team who have returned all their profits to the charity Feedback? New beer that’s what! 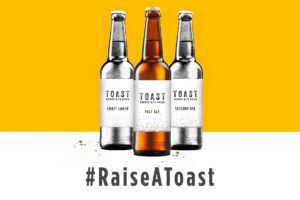 Not content with making a crust and giving that crust back to the ones that need it the Toast team are now hoping to expand their beer range to include two new beers – but there’s just one thing standing in their way – a crowdfund target. Trying to make a chip into a food waste pile the size of Wales is not easy and they have decided to call on the help of beer lovers far and wide. And what do we get in return? Well two new beers for starters and a host of great payback incentives. Toast hope that should they hit their target of £20,000 they will brew a craft lager and a IPA using the same techniques and values as the first lovely beer, only this time with a new twist. Anyone can get involved and they are already half way towards their target as we type. Here at Craft Metropolis we have always supported not just good, varied beer styles but charity and can’t wait to add the new brews to the Toast bread beer  we already stock.

So to be part of a brewing revolution – for charity – then put your pennies into combating food waste and get some beer in return. Win win.

Here is the crowdfund link again, don’t delay 22nd March is the cut off for pledges