Watneys – how to bring a bad beer back…but better

Watneys beer. Red barrel. The 1970s. Remember those? Maybe not with fond memories but a brave band of brand revivers have taken hold of the iconic brewery and have given the beer a facelift. We catch up with the team behind Watneys pale ale beer – their new creation – to see why they decided to bring back a beer from the past…. 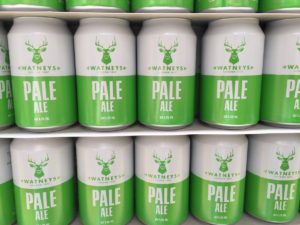 1) Why bring back beer from Watneys?

Watneys was a true beer icon. A real London beer with personality. It had it’s highs and lows but it was a trailblazer in a lot of respects. First keg beer in the UK, advertised by Michael Cain, featured in Monty Python. We wanted to use all the best bits of the brands personality without getting too tied up in heritage. Its name is etched into the architecture of pubs all over London so its a name most people recognise but we wanted it to be truly modern & appeal to todays beer drinkers. Watneys has heritage but its not a “heritage brand”, it tastes nothing like it used to, we acquired the brand and started again. Three friends, finding great craft brewers to make a beer we wanted to drink.

2) The tagline is “Tastes nothing like it used to” can you explain more.

The 60’s & 70’s were not the best days for the UK brewing scene in general. Beer offer was fairly average. We had no intention of re creating the old Watneys recipes, that’s not what we’re about. We wanted great beer, brewed well for todays drinkers. A lot of real ale purists have enjoyed knocking Watneys over the years, ironically since we launched many have given us grief for not being true to the original recipe! The tagline is us being honest & having a bit of fun with it. We’re a pretty straight talking bunch so why not say it how it is?

3) Some people remember Red Barrel – was the green on the can an attempt to get away from the red image?

Not at all, we’re not trying to hide from any of it. Just felt a great colour for a fresh start (my business partner & I argued about it for days, I still think we can go more neon!!). Red is part of Watneys, don’t be surprised if you see it again, but nothing like it used to be! 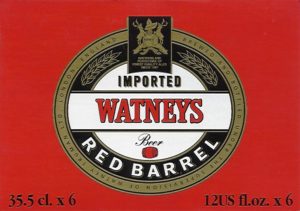 4) Watneys is maybe seen as old school but is this resurrection an attempt to put it in the established older ale camp and craft beer camp at the same time?
I think todays craft market needs strong gateway brands, accessible to those wanting to broaden their beer drinking repertoire but a bit intimidated by some beers out there. That’s where Watneys plays. Our consumer base is broad yes, the older ale drinker curious about what we’re doing & a younger crowd coming to Watneys for the first time. Everyone is welcome! 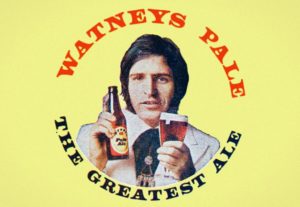 5) How has the new video campaign been received?
Really well. Starting to get out there. The Bard is my favourite but look out for The Lobster, one of our sales guys made his screen debut dressed as a 6ft 5 crustacean! After filming he spent the rest of the afternoon roaming the streets of Camden terrifying the locals!

6) Plans for more beers? If so tell us more….
Certainly do, we‘re launching a keg range in pubs in May. We will extend the can range over the coming months to include a cracking IPA and, dare I say it…Red.

7) Tell us more about the company, who is involved
Myself & Nick are at the centre of things. We both have a beer history – industry & social! We sat down a couple of years ago with the the idea we could create some great modern craft beers with interesting back stories & heritage. Once we secured the brands we wanted we started the fun bit, re branding, creating recipes & talking to local brewers we respected to convince them to help. Its been a full on year but its a great feeling seeing Watneys being drunk by a whole new generation of drinkers.

8) What other breweries and particular beers do you like?
We work with Sambrooks in Battersea so obviously I’m a fan (particularly of their Black IPA), I like Pressure Drop beers too. Outside of the big smoke my current favourite is Lagunitas 12th of Never – love it!

9) Plans for the next 12 months?
Get everyone to try Watneys, get them to try it again and again…. and hopefully have a holiday!

If you’d like to buy Watneys new beer online click here! Voucher code WATNEYS3 gets you £3 off any box when you add 4 or more cans of Watneys beer to your box.